IG. Sudue The Western Regional Student Parliament of Liberia over the weekend crowned and certificated Liberia’s illustrious and hardworking Inspector General of Police Col. Patrick T. Sudue as the Best Security Personality of the IG. 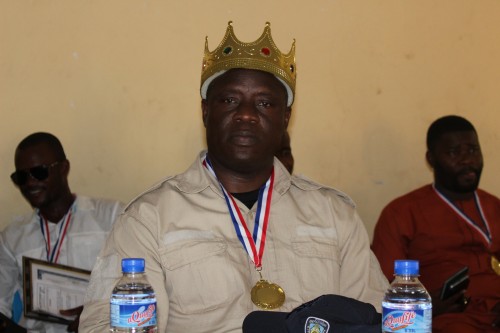 The Western Regional Student Parliament of Liberia over the weekend crowned and Certificated Liberia’s illustrious and hardworking Inspector General of Police Col. Patrick T. Sudue as the Best Security Personality of the year 2018/2019.

During the ceremony, the Student Parliament lauded the Police Inspector General for playing a very essential role in the peace building process and the continuous fight against criminalities in Liberia.

Police Inspector General Col. Patrick T. sudue expressed gratitude to the Student Parliament for the recognition. He said the award came as a surprise and the honor bestowed upon him is as a result of collective effort made by the gallant men and women of the Liberia National Police Who have collectively worked tirelessly in ensuring that peace and tranquility prevail in this country, this is the reason why I have been awarded the highest award of this organization.

Col. Sudue said the honor came in at  the time where Liberia is at a crossroad, and over the past years, the effort of the Liberia National Police has been recognized by its own citizens, ‘’this is not the first award that I have received. I have received other awards, but this award is being climaxed with a crown. So it makes this award to be very different’’.

The astute Police Inspector General thanked the President of the Republic of Liberia Dr. George M. Weah, for preferring him to serve as Police Inspector General. He further commended the Community Watch forum of Liberia for partnering with the LNP in the fight against crime and the Media that has been playing a pivotal role in ensuring that justice is dispensed in this country to the highest.

The Chief of Press and Public Affairs Division of the Liberia National Police DCP. H. Moses Carter Sr. was also certificated as Government’s best Communication officer of the year among other government officials.