Following the pronouncement by the National Elections Commission for the holding of the Runoff Elections slated for December 26, 2017, the National Election Security Taskforce, has resumed work to ensure the successful handling of security during and after the runoff elections.  The Taskforce under the Chairmanship of the Inspector General of the Liberia National Police Gregory Coleman met Tuesday, December 12, 2017, to discuss the way forward for the early deployment of elections’ security officers who were recalled immediately following the first round of elections on October 10, 2017.

The meeting was attended by the heads of Liberia’s Security Agencies making up the National Elections Security Taskforce.
They expressed commitment to ensuring and creating a security environment conducive for all Liberians to exercise their political franchise void of harassment and intimidation. 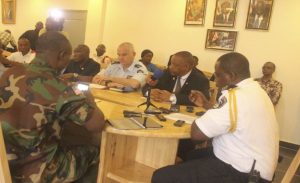 Inspector General Coleman in brief remarks lauded the various security agencies for the professional and dedicated commitment they have shown in handling the elections and urged them to be more alert for the runoff, stressing that the National Elections Security Taskforce will remain neutral and professional in conducting its’ activities.
He called on Liberians to remain law abiding during and after the time of the political campaign, and do away with acts that will undermine the country’s political transition.