Cross Section of Citizens In the wake of standards and international best practices in modern democratic policing which calls for proactive Policing engagements as a means of crime prevention, on Sunday, February 10. 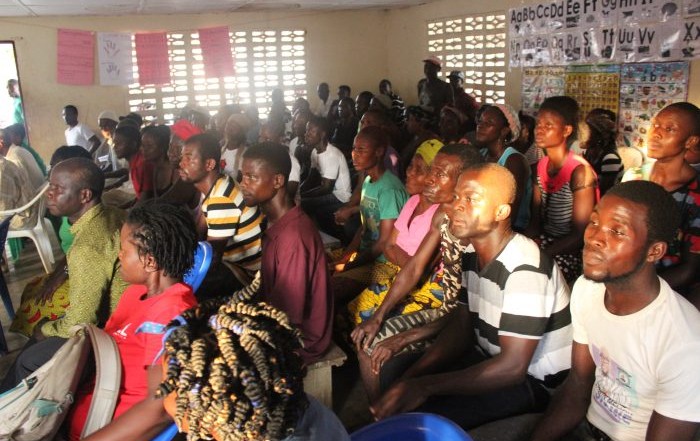 In the wake of standards and international best practices in modern democratic Policing which calls for proactive Policing engagements as a means of crime prevention, on Sunday, February 10, 2019, a high power delegation from the Liberia National Police headed by Police Inspector General Col. Patrick T. Sudue ended a three day Community Police outreach in Medina, Grand Cape Mount and Beasou Town in Bomi County, under the Theme, ‘’SAY NO TO VIOLENCE AND YES TO THE RULE OF LAW’’.

The Community Policing engagement meeting was intended to take the Police to the communities to discuss issues of criminalities and other forms of violence that are affecting these two towns and the counties at large and finding means of amicably resolving these issues.

IG Sudue’s visit to Medina was as a result of news of protest by residents of Medina in demand of the Sime Darby Company paying for their land and other benefits. The Police chief used his conflict management and effective community policing skills to discourage residents of Medina to put aside their decision to protest. The residents being convinced from the anti-violent lecture provided by IG Sudue assured him of their commitment to cut off their protest action until he can work with them to ensure that their plights are heard by the Sime Darby Management.

Hence, IG Sudue promised residents of Medina and Beasou to bring them under one palava hut on Sunday, February 17, 2019 in curtailing palm theft and other crimes which are prevalent in the area.

During his visit at Beasou, Col. Sudue being so passionate, humanitarian and Police oriented, promised the citizens to restore safe drinking water in the Town by underwriting the cost to repair all the damaged hand-pumps. He at the same gave two hundred United States Dollars to the Community Watch Forum and One hundred United States Dollars to the Women group for their positive roles in working with the Liberia National Police in the fight against crimes.

The Police Chief and his entourage also visited Kingjor Town, Grand Cape Mount County and restored calm following disagreement between the Citizens and the Gold Mining Company (Bea Mountain) that resulted into violent protest which lasted for several hours in demand of job slots that should be occupied by selected members of the Town to work with the Gold Mining company operating in the area.

Having listened to the plights of the protesting group, IG Sudue immediately held meeting with authorities of the company who assured him of their commitment to ensuring an amicable settlement of their grievances. They however agreed to sit with the aggrieved residents on the 8th of March to address their grievances.

The Police visit to the two western region ended with smiles and appraisals by residents for the professional relationship being built by the Inspector General of Police, Hon. Patrick Sudue and residents.